The Lion
Series: Archetypes of Metaphor and Reality
€ 200
Limited to 50 prints
40 x 60 cm
Silkscreen Print on Archival Cotton Paper 300 gr
A Certificate of Authenticity signed and sealed by Rana Zaher is supplied with this print
PURCHASE PRINT
The metaphor of the king in Neo-Assyrian royal propaganda is primarily the lion.
Wearing a fantastical lion-shaped helmet, this royal archetype exudes Assyrian kingship,
enhanced by the backdrop of iconic archers depicted in Assyrian King Assurbanipal’s war reliefs.​​​​​​​

"Archetypes of Metaphor and Reality' represents a means of dabbling with the visual culture and art of ancient southwest Asia in order to re-imagine certain archetypal characters that had occurred throughout the visual language of the ancients, be it through their text, art, their myths, or their realities.​​​​​​​
Symbolism and metaphors indeed played a strong role in presenting and representing various personages, from kings and queens to mighty goddesses and wrathful gods. In fact, almost every item, animal, feeling, dream, transaction and event had its own metaphor, an interpretation suspended between the dimensions of reality and the supernatural realm.
In many ways, the characters and visual projections created in this series also experiment with means of creating my own imaginary realm, all the while staying true and respectful to the contextual and metaphoric meanings of every detail represented.
The first two pieces of this series, The Fortress and the Lion, represent a metaphoric construct of Neo-Assyrian kings and queens. In many ways, I try to create a bridge between forming a sort of archetypal representation of Neo-Assyrian royalty while also projecting them into an alternate reality of their own.
In all, my goal with working on this series has been to experiment with representing a similar merging of myth and reality, the supernatural realm and the real world, untamed wilderness and urban civility that the ancient artists, scribes, diviners, priestesses, and peoples of ancient southwestern Asia considered part of their daily lives and belief systems. It is also a push to stress on the great artistic and cultural contact and exchange that went around between the cultures of Southwest Asia and the Eastern Mediterranean, from the Aegean to the easternmost reaches of Persia and beyond. 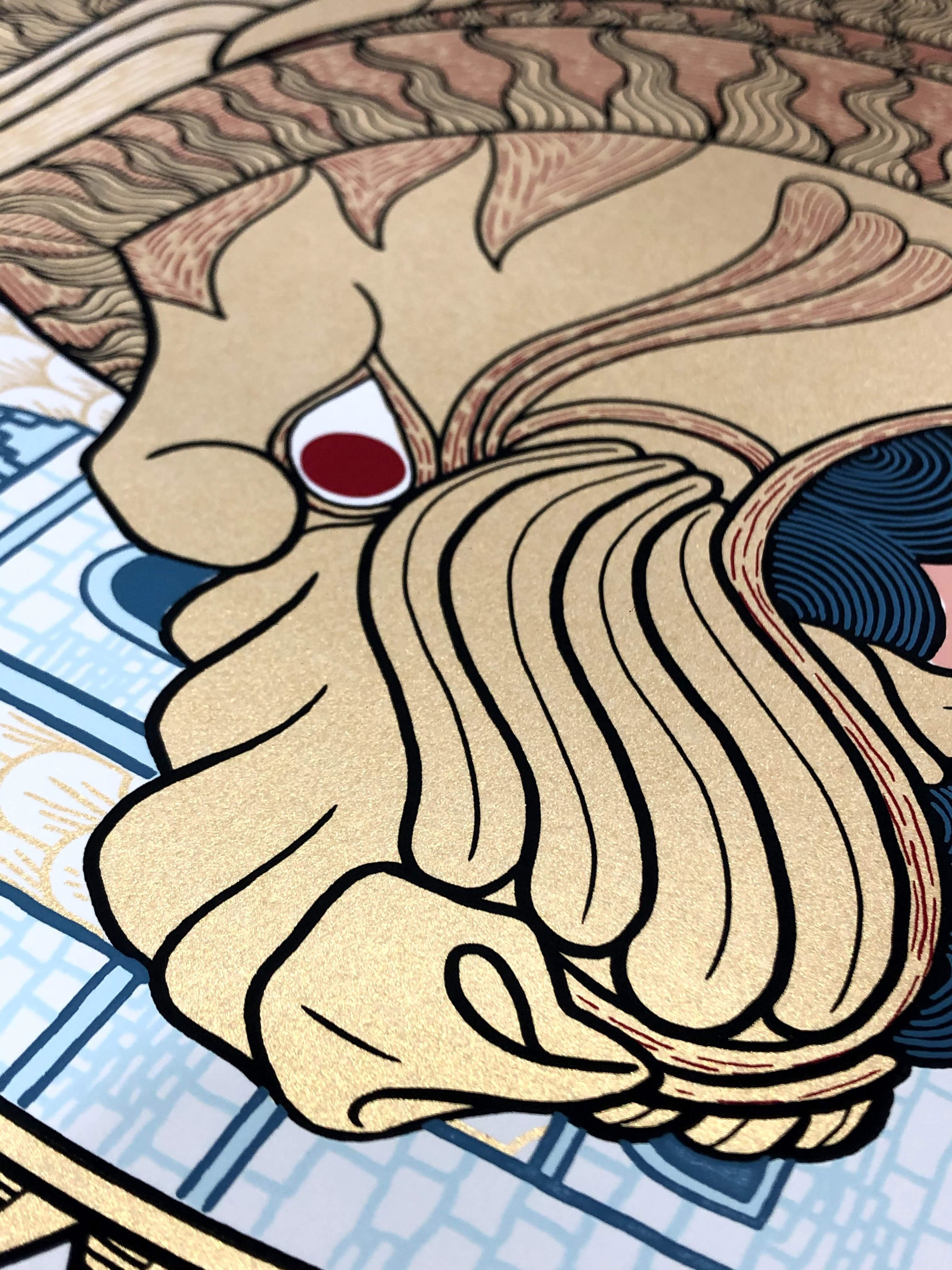 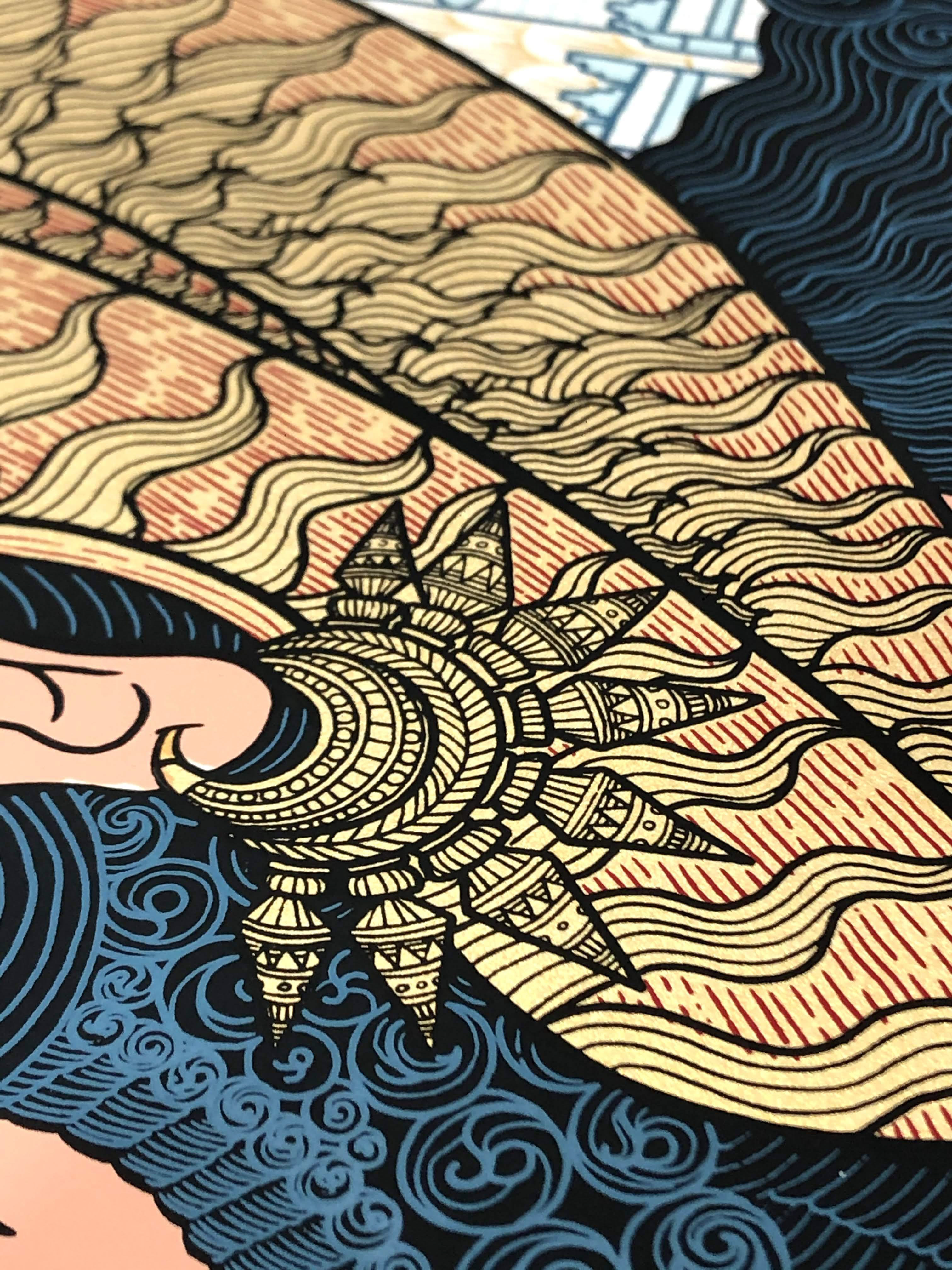 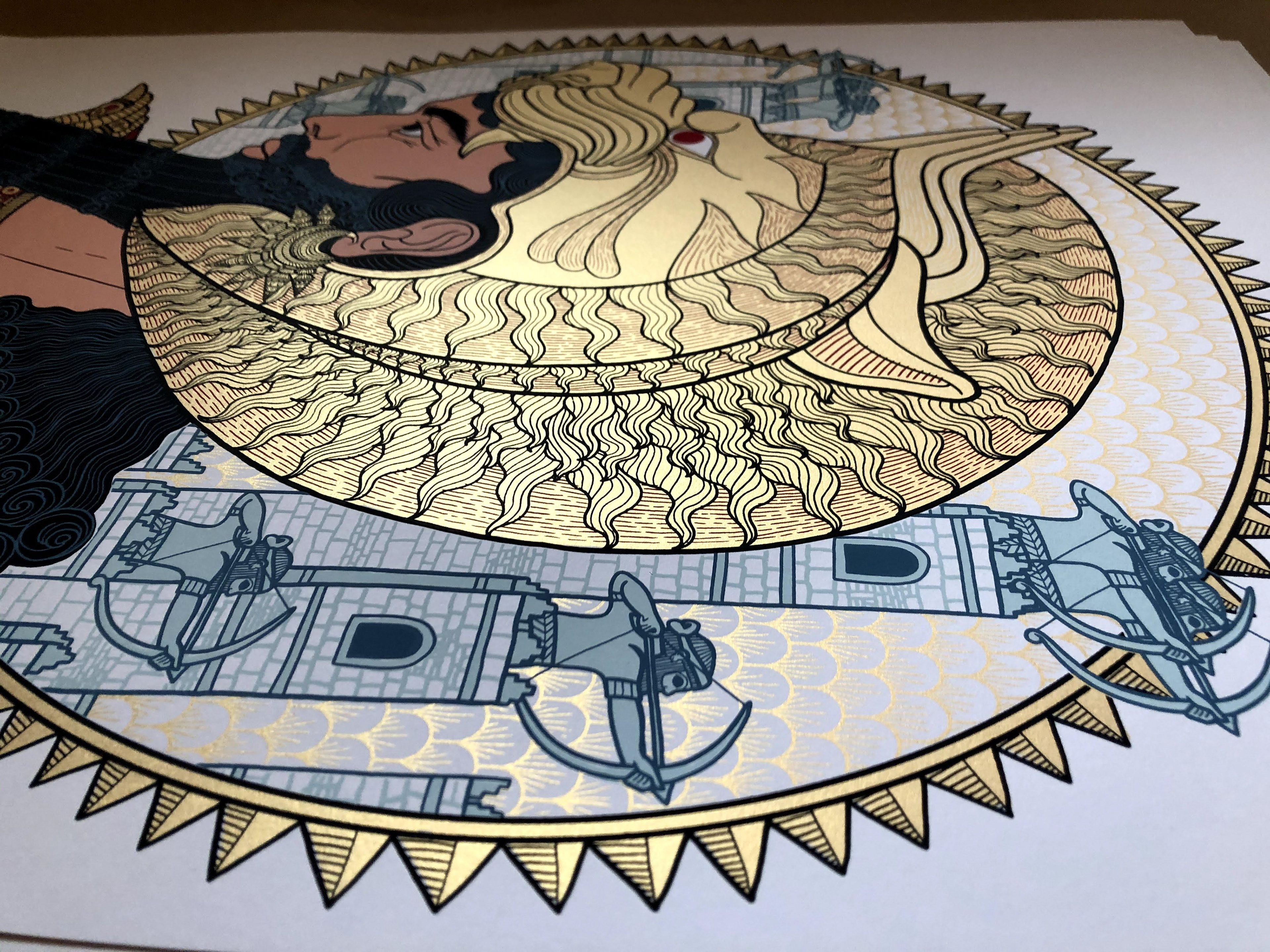 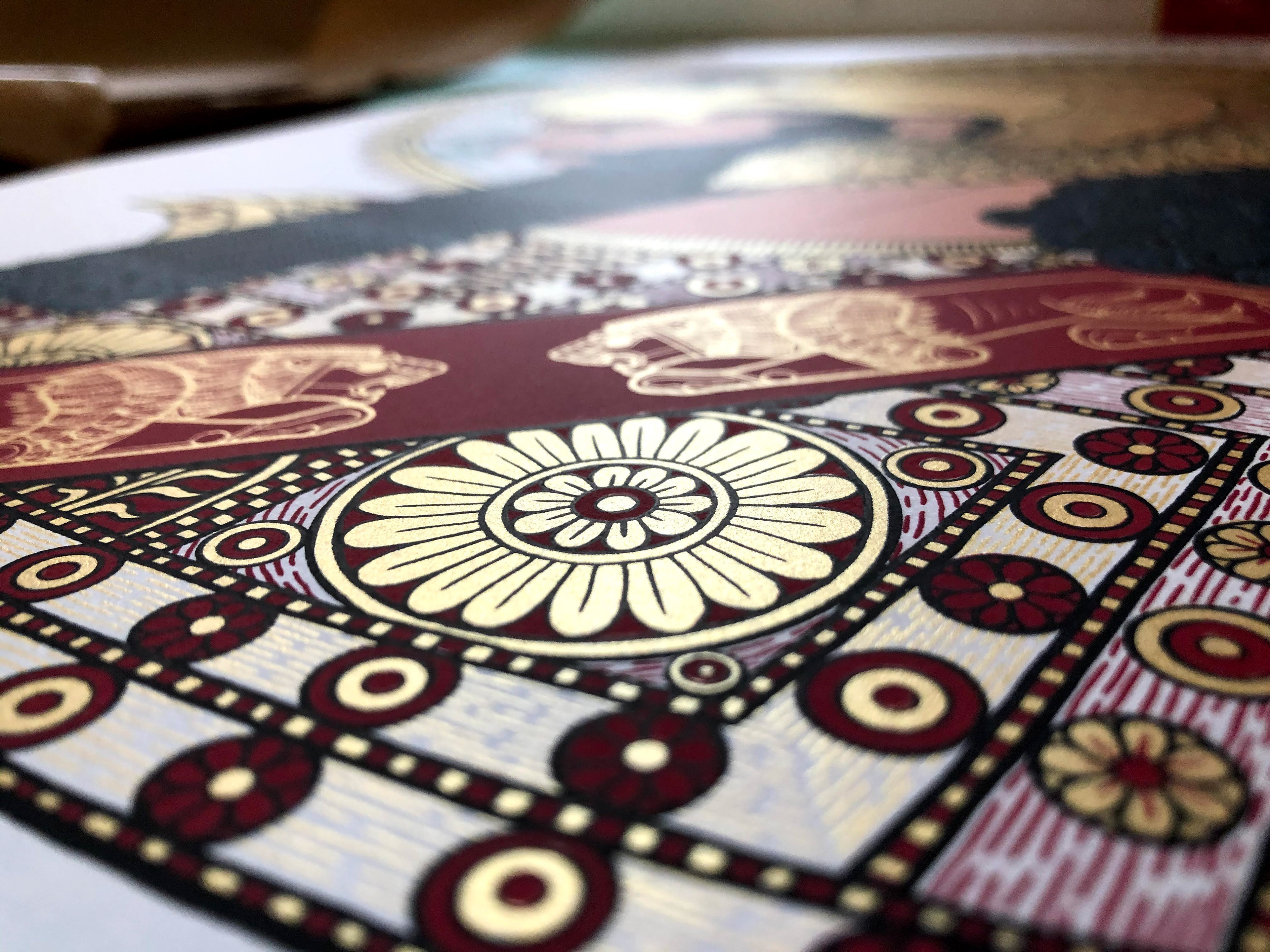 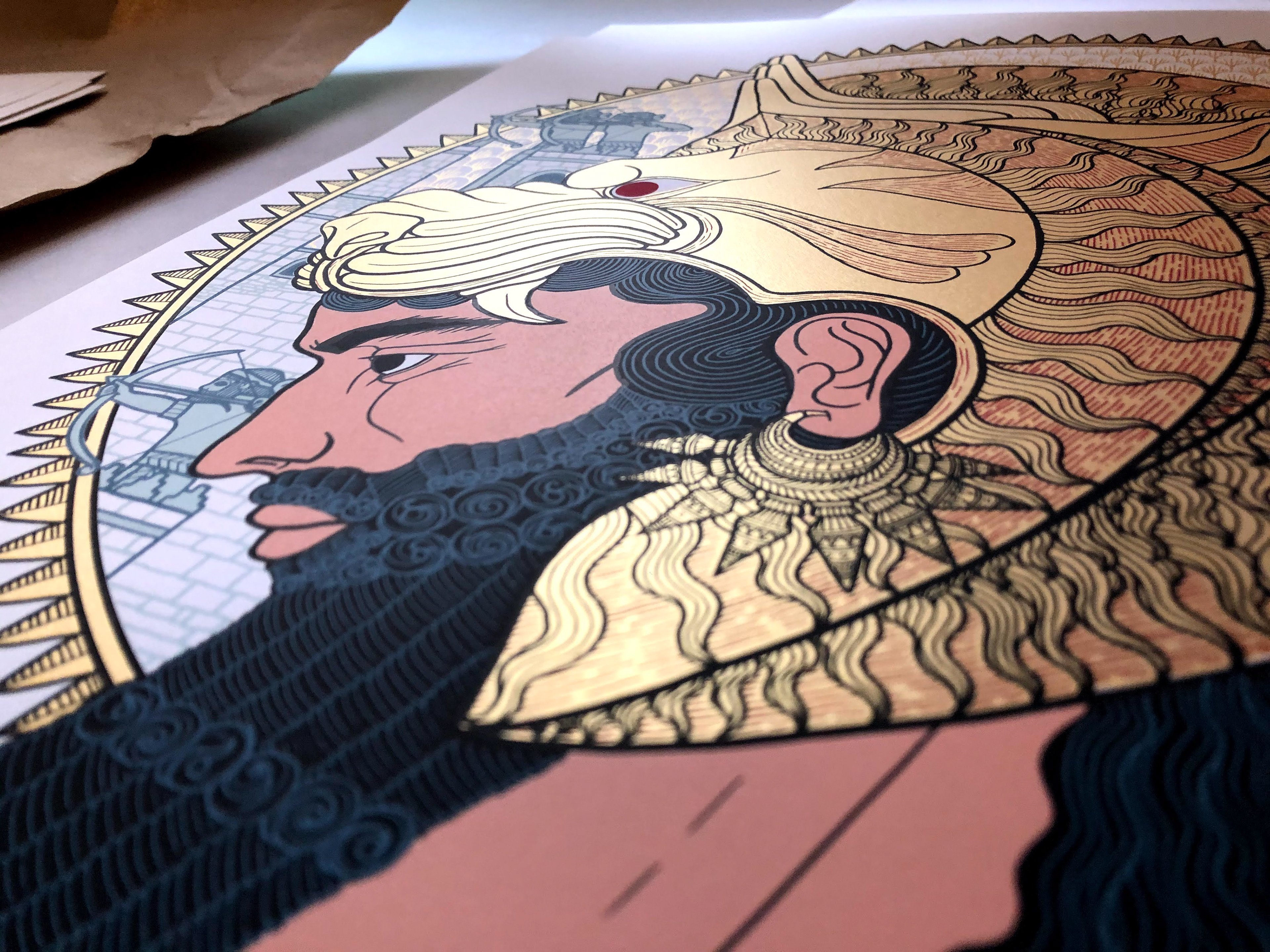 THE BEAUTY OF SILKSCREEN PRINTS
Printing these two pieces of work manually via the silkscreen method is one of the best decisions I have made. While it took ten times the effort, the result is unquestionably  (and literally) brilliant. Each layer of color from each piece of work was manually printed separately, and each print had  a whooping six layers of color.
Silkscreen printing allows for works to have a solid finish devoid of the ‘noise’, pixellation, and mutation of fine lines that digital printing of large-scale work presents. Secondly, printing using the silkscreen method presents the full effects of hand-made craft, a beautiful touch for works that took much effort to make and deserve more than being digital prints. Also, Silkscreening enabled me to utilize a beautiful solid gold color that allows the work to ‘pop out’. I was also able to comfortably use my favorite archival quality  cotton-based paper.  Finally, being able to print the works using bare human hands instead of the digital process is a great shoutout to traditional printing methods which are in danger of becoming obsolete in the MENA region.​​​​​​​
↑Back to Top